Today I thought I would tell you a bit more about affenpinschers as they are not as well known as us schnauzers but they are a very old breed of dog. The breed originated in Germany and their name means monkey dog. (Affe is German for monkey) They are thought to be one of the oldest breed of toy dogs going back to the sixteenth century. They are pictur

Affenpinschers were used as ratters but they also became much loved pets as they are very good at making people laugh with their comic antics. My brother Crybbe is a master at comedy especially in his training class doing little bows and twirls instead of obeying the commands and sitting and looking at the instructor with his head on one side.

Affenpinschers can have pricked ears like Crybbe or drop ears like my little sister Aoife. Crybbe was not born with pricked ears though. Here is a picture of him on Christmas Day at 4 months old. 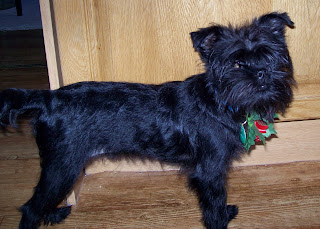 But when he grew older his ears gradually went up - first one then the other!

Affenpinschers are now not a common breed at all even in Germany. The highest number of dogs is probably in the USA. Affenpinschers were introduced into the UK first in the 1890s but only in ones and twos. The breed did not really begin to be established until the 1970s and even now there are only about 100 puppies registered a year with the Kennel Club. It is thought we miniature schnauzers have affenpinschers in our breeding from years ago when the standard schnauzer was cross bred to reduce its size and make a smaller dog suitable for city living and to be a companionable pet. 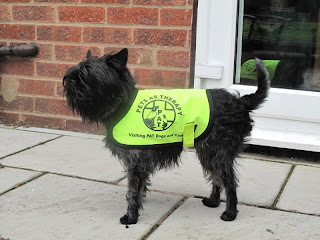 Affenpinschers are intelligent dogs and can be trained to work as medical alert dogs. The picture above shows Crybbe who has worked as a Pets As Therapy dog visiting nursing homes to cheer up the residents! But some dogs are trained to work as assistants to people with a medical condition that could put their life at risk and one affenpinscher is working in Exeter with his diabetic owner Eileen Reed to help keep her well. Click on the link to read their story! 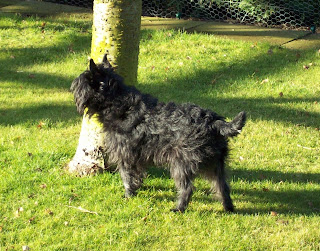 Affenpinschers are uaually between 10-11" tall (24-28 cm) and weigh around 8-9lbs (4 kg) In the UK their coat is always black although it can go grey at quite a young age.  They are judged in the Toy Group at dog shows.

Affenpinschers are not the dog for all people though. They may be small but they want to be top dog! They will protect their food and their toys by any means possible and are not slow to nip anyone who tries to steal them whether dog or human! 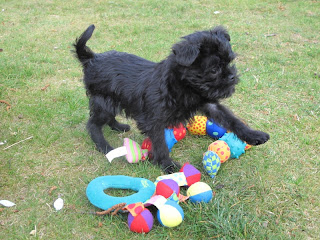 But they are fun to live with most of the time :-) and I wouldn't want to be without my little sister really; 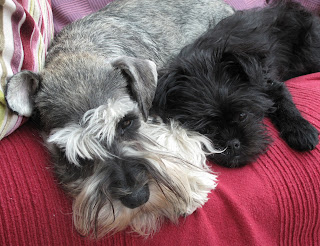