A Little History of the Schnauzer 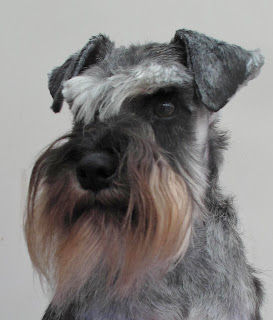 Today I  thought I would tell you a bit about schnauzers as most people know about mini schnauzers or have at least seen one but not so many know there are actually 3 sizes of schnauzer: giant, standard and miniature.

Schnauzer type dogs go back to the Middle Ages but it was in the 19th century that the 3 distinct breeds of schnauzer were really developed.The original schnauzer was a German breed that was used to work with people driving cattle to market, with night watchmen patrolling the streets in the past and also to keep down vermin in homes, farms and yards. There is a statue in Stuttgart erected in 1620 of The Night Watchman with his Dog which is believed to be an early type of schnauzer. The dog is quite sturdy and would have been a bit like the middle size of schnauzer today which in the UK is just known as a 'schnauzer' but in the USA is called the 'standard schnauzer'. At shows, the standard and the miniature schnauzer in the UK are shown in the 'Utility' group which is for dogs who had a function or did a job of work in the past but now are not really used for that any more. In the USA the miniature schnauzer is in the Terrier group for showing. 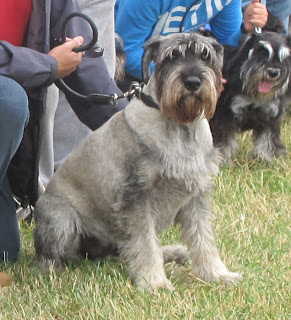 This is a picture of a 'standard' schnauzer nowadays - as you can see they are much bigger and heavier than us minis! They weigh between 35-50lbs (16-23 kg) and are up to 20" in height. Most standard schnauzers are a pepper and salt colour.

The schnauzer was loved as a faithful companion in the past and peeps thought it would be useful if they could have even bigger stronger schnauzers to do guarding work and other jobs like that...and if they could have smaller friendly little schnauzers who would be happy to be companions for people who wanted a pet and who lived in apartments or small houses and did not have room or need of a big dog. 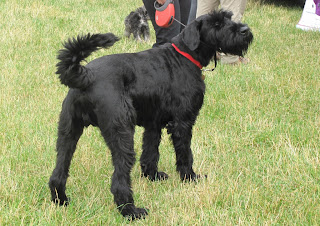 The giant schnauzer is a very big dog weighing 70lbs - 100lbs ( 32-45 kg) and standing up to 27.5" (70cm) . It is thought the black Great Dane or the Bouvier de Flandres dog may have been used to create the Giant Schnauzer and they are shown in the Working Dog group at dog shows and have been used as a herding dog in Bavaria and by the army and the police in several countries for guarding and protection work. The giant schnauzer is most commonly all black: 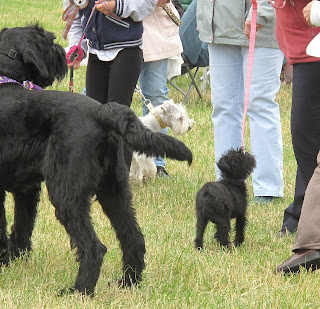 This is a giant schnauzer at the Fun Day the schnauzer club held last year - you can see how big he is next to our Aoife and the little white mini at the back.

It is believed that the miniature schnauzer was bred down to a smaller size using small dogs such as the affenpinscher. No wonder Crybbe and Aoife think they are so important :-) Miniature schnauzers can be seen in many colours but here in the UK the only recognised colours from the Kennel Club are pepper & salt (like me!) black; black and silver (like my boys Otto & Malfi) and just recently white has also been accepted. 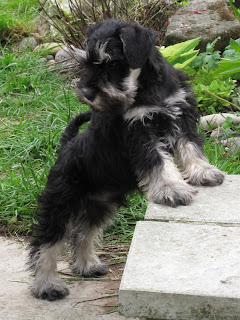 Malfi - one of my black & silver pups.

An interesting fact about our breed is that the name 'schnauzer' comes from a dog called Schnauzer who won the wire haired pinscher class at an international dog show in Hanover in 1879. Schnauz is German for muzzle (snout) and he got his name because of his lovely bearded muzzle! Some years later the schnauzer breed was born when the pinscher dogs were divided into two breeds - the smooth coated keeping the pinscher name and the rough-coated becoming Schnauzers! There are not thought to be any other breeds who are named after an actual dog :-) I hope you have enjoyed this little history of the schnauzer. 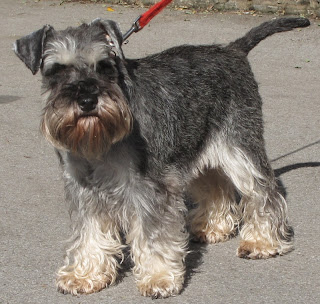