It has been very busy here for the last few days and Leigh has had no time to put up any more pictures until now. My pups are growing bigger every day and now they have started eating some proper food I don't feel I have to do as much cleaning up after them as I did. So Leigh & Judith are having to get down to it instead :-) 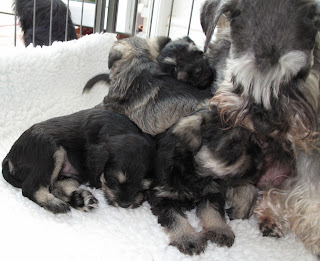 I do still check them out though often and we have a bit of bonding and I see that they are doing OK........... and they see if they can still get a drink of milk! 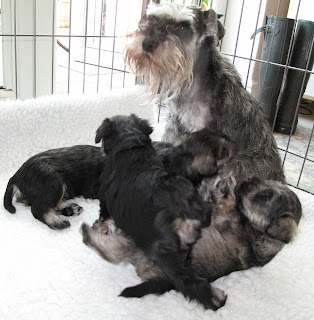 These photos have been taken in the puppies' new pen. They now have 2 places to play. This new pen has been put up in the kitchen/dining area so that the pups can see what goes on in the busiest part of the house and get used to all the noises. Aoife has been to see them through the bars - she tries to get in to play with them but is not allowed to yet. Even my sister Caoimhe is getting interested in watching them. 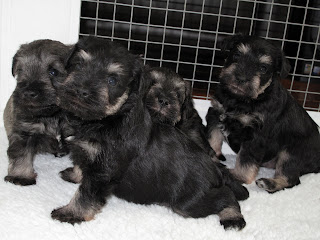 This is a photo when they are in the whelping box extension which they still use as a second play area when the kitchen one is getting cleaned out. 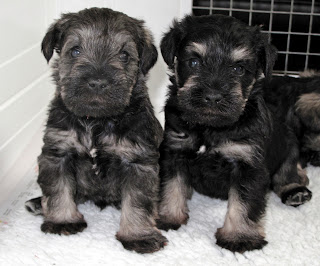 These are 2 of my boys - one pepper & salt colour and one black & silver. 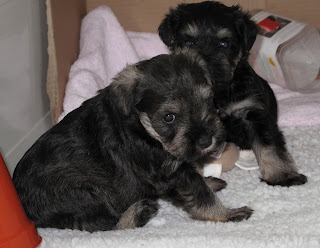 This is my little pepper & salt girl with her black & silver brother.

They are nearly 5 weeks old now and some of them will be going to their new homes in just 3 weeks time - it is hard to believe it has passed by so quickly!