We had another fun packed Saturday here in Yorkshire at the Bramham Horse Trials. There are 4 days of horse events - things called dressage and show jumping and cross country. People with horses come from all over Britain and some from France and Germany and Canada and New Zealand ...and well all over really. It was even busier than the Yorkshire Show and many more horses but these were lovely ones all made smart and boy could they jump! 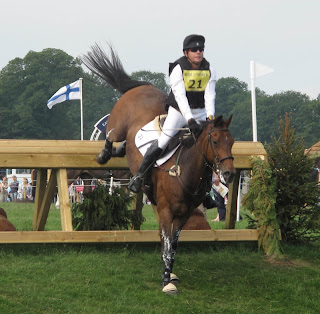 We all went along - me and Alfie Crybbe walking and Kaska in his pet stroller and Aoife in her pet bag. Actually Aoife has got more into walking but she couldn't manage the whole 4 miles as we walked round the whole cross country course following the horses. All the jumps had wooden carvings and things round them and some had them underneath: 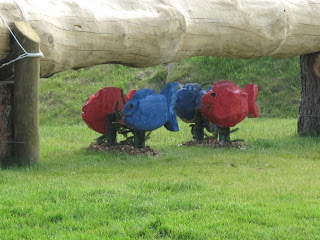 While we were walking round we saw this great big creature jump from behind a van - or so we thought - I was sure a cow had escaped but then it was OK as it was only a model: 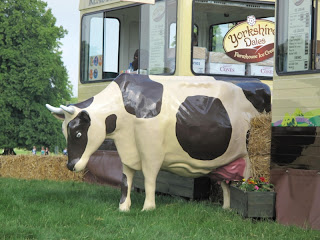 It was by an ice cream van so we decided to have a rest and a snack: 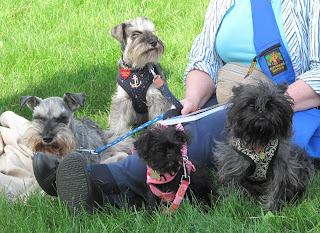 The horses were galloping past all the time to go over the jumps, all through the fields and the woods: 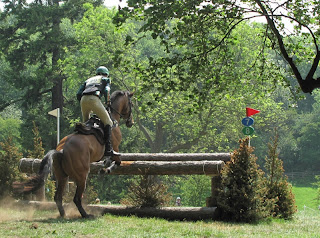 The security people had to blow whistles to warn us that the horses were coming but I think we would have known from the thundering of those hooves- they were very heavy! 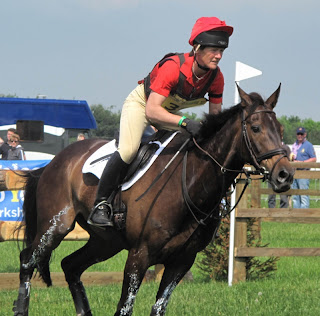 Lots of other people were following the horses too but there were some who were interested in us and came up to talk to us and one lady said we were the best behaved dogs she's ever seen! I thought we should have that in writing - I'm not sure Judith & Leigh appreciate what fine dogs we are - or maybe that lady hasn't seen us on other days :-) ! 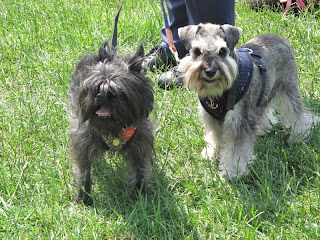 You can see me smiling here - Judith & Leigh think I'm scary when I smile I don't know why.
Anyway here's one more picture of those brave horses and riders that we watched. I wanted to warn him that he was going to jump in the water but he didn't seem to mind! 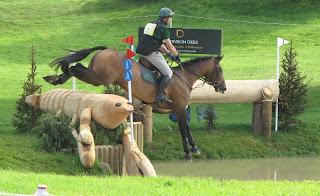