Girls' Day out in York

Yesterday Judith & Leigh took me and Aoife on a girls' day out in the city of York which is about 14 miles from the village where we live. It was part of Aoife's socialisation programme to meet more new sights and sounds and things and turned out to be a bit of a 'school trip' as York has many historic sites. 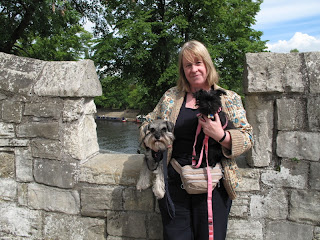 This is Judith holding me and Aoife just as we started our tour of the city. You can see the river behind us so Judith had to hold us tight so we didn't fall over the battlements. We were on the city walls and people are allowed to walk all round them but not dogs! - the path is very narrow and they think we would fall off. The river is the River Ouse and when I was a little puppy I was taken on a boat trip on it which was great fun. 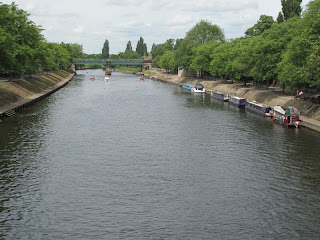 This is the river from the bridge. You can see some of the boats along the bank. Last winter it froze over and the ducks and swans had to walk on the ice. 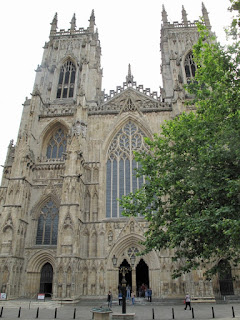 This is a picture of York Minster which is the largest gothic cathedral in northern Europe - they started building it in the 1220s and it took 250 years to finish! It is huge - and they don't let dogs in there either so we had to just look at it from outside. We did get to walk round the food market though which was really much more interesting anyway. There were stalls from all over the world there cooking and selling food - curries and paella and meat and cakes and ...just every yummy thing you could think of. The best stall of all was the sausage stall - it had so-o many different kinds and huge great big sausages hanging up: 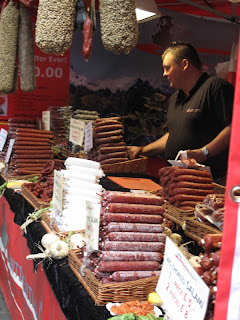 I thought we could have bought a large goody bag from there but sadly the only thing we came back with was some cakes for Judith & Leigh and some flowers for the garden. I think on the next girls' day out I should do the buying! After we toured the market and stopped and talked to many people on the way, we went to see Clifford's Tower which is a stone castle keep on a high hill which was built in the 13th century after the old wooden one which William the Conqueror built 200 years before was burned down. 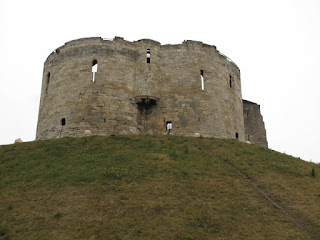 It also seemed to be a place where geese lived with their babies: 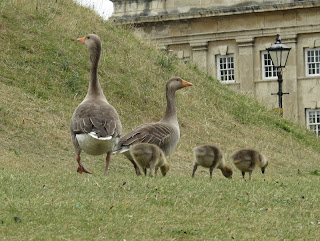 The geese kept wandering into the road and the cars had to stop for them. They seemed quite at home there: 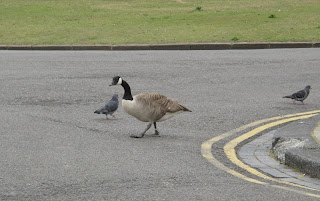 We were getting really tired by this time and so we headed back home on the bus. It was the first time on a bus for me too this visit as last time I went to York with Judith & Leigh we went on the train: 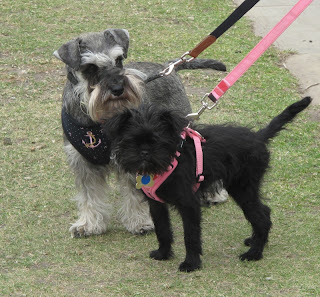 Hope you liked our little historical tour of York - it was fun and we did get a lovely special lunch when we got home so we didn't really miss out on the goodies.
Posted by Moth at 04:00