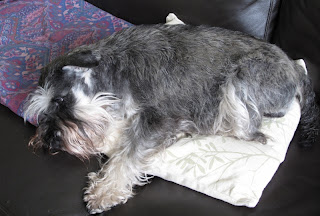 Leigh: Magic is taking a rest from blogging for a bit so I'm going to give a little progress report on her behalf! As you can see from the photo she is pretty fed up at times with her growing size. She is eating plenty - no trace of morning sickness - and still goes on walks but only on-lead. Luckily with the weather being so dull it is no loss not to be going for country hikes here.
In dogs, the pregnancy lasts around 9 weeks and for the first 5 weeks there is very little sign externally. Then the nipples start to enlarge and point and the breast tissue swells: 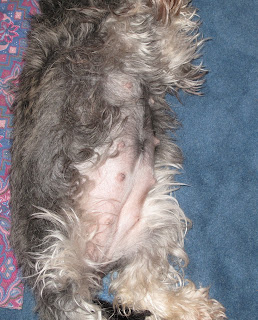 This was Magic a week ago - she is bigger still now but doesn't want her picture taken, needless to say. The development of the puppies is very rapid. 21 days after fertilisation the embryos develop their central nervous system and within a week the brain and spinal cord are formed and all the organs of the body, limbs, head, eyes and face begin to develop. At the stage of pregnancy Magic has now reached the foetuses will have their sexual characteristics formed and their eyelids will have closed. The next couple of weeks or so there will be further development and the pups growing to their full size to be viable at birth. Puppies can be born from day 57 but it is usually between 60-63 days. We will be anxiously waiting by the weekend of Crufts - Magic should be due to give birth the following week!

Our other dogs are aware that something is going on with Magic - much sniffing of her rear end naturally - but how much they know is a mystery :-) Caoimhe has no idea of being gentle around Magic and would accidentally kick her, leap on her or just knock her flying in sheer youthful exuberance. Aoife has become very maternal herself - she stays close to Magic when she can and constantly cleans her - licking her ears inside and out and trying to clean her beard! Poor Magic ends up looking very bedraggled: 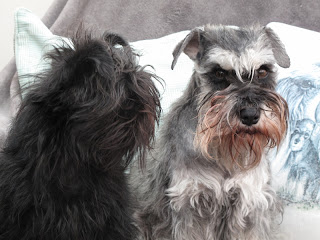 Magic may well come back to blog about her feelings on this before too long. Just thought I would give you a bit of background - apologies to the squeamish and probably the boys for too much girl talk here!
Posted by Moth at 04:40