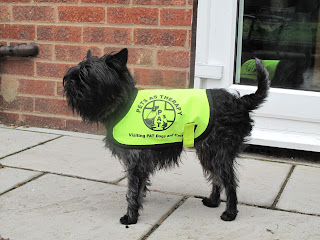 Well I was so excited about starting this blog business that I couldn't wait to add some more! I thought I would let you know a bit more about my brothers, Kaska and Alfie Crybbe. Alfie Crybbe has two names - because he says all the top dogs have two names and who am I to argue? He does take his top dog status seriously though and goes out doing voluntary work visiting care homes. He has a special jacket and lead - although he doesn't like wearing the jacket - he thinks top dogs don't wear jackets. He thinks the people in the care homes are very privileged to meet him - him being so important!? Well I'm planning on doing the same thing when I'm older but I'm not telling Alfie yet!

Any way while Alfie Crybbe is out doing his good works me and Kaska will be left to watch the house and supervise those workmen who are now building a wall outside our house - they have really made a mess of that patio and instead of chasing them off Leigh is making them cups of tea and coffee - I'll never understand humans. Kaska is my favourite brother - he can't always play rough games though because he's had a spinal cord injury and they said they couldn't operate so Kaska's back legs don't work very well and he drags them along and sometimes falls over if he turns too quick. He has special wheels to help him when he goes out. They were specially made for him in Bridlington and he can go very fast when he wants to chase a cat or dog. 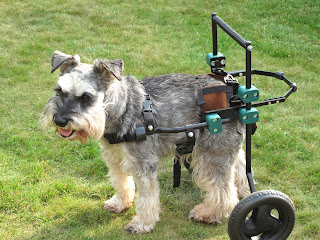 I know you would rather see pictures of me but I hope you like the photos of my brothers above.
Posted by Moth at 01:50