Holiday time and we have had lots of visitors and what with that and trying to keep little Aoife amused I've had no time for blogging. Me and Aoife are getting on pretty well though - she can be fun to play with even though she does forget I can feel pain when she bites me! 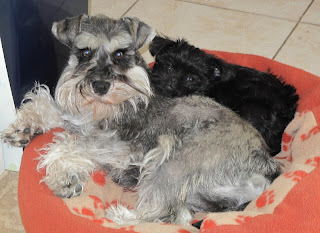 Anyway with all the visitors there were lots of cakes and other yummy things on offer but not enough coming our way. Thinking about food I thought Iwould tell you a bit about our food. We are on the BARF diet - not for losing weight as we are all very trim - but it stands for Biologically Appropriate Raw Food -or that's what they tell me. It's supposed to be better for dogs especially if they have any allergies etc as it's more natural than kibble and easier for dogs to digest. It all started here with Alfie Crybbe - of course. As you know schnauzers are good eaters - "if it's edible eat it" that's my motto. And if it doesn't seem to be edible give it go as it just might be. But not Alfie Crybbe - the Prince of Fussyness. When he came to live here he kept turning up his nose at every food there was. He would have one kind of kibble for a day or two and then not like it. Judith & Leigh were trying all sorts of good stuff and it was no good. Then he decided the only thing he liked was raw chicken wings - he loved them. But they weren't going to be enough for him to grow strong - then Leigh found an advert in the Dog World paper for a company that made raw meat and bone dinners mixed with vegetables & fish oil and stuff to make it really nutritious so they tried it ..and phew - Alfie decided he liked it. It was just like him to want the upmarket food. Anyway now we all eat it - even little Aoife has her Puppy Country Banquet and loves it. So I suppose we should thank Alfie for getting us some tasty food - even though I like kibble too. 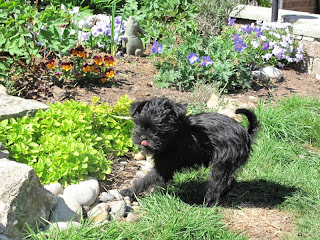 Aoife making a face at the camera - so many pictures being taken of her she thinks she's being hounded by paparazzi!
Posted by Moth at 02:34